Hello Friends Today we Bring A brand New Article for you .. as you can see in Heading Types of Twins : Identical, Fraternal & Unusual Twinning .. this article is all about Twins.(Judvaa) Babies. 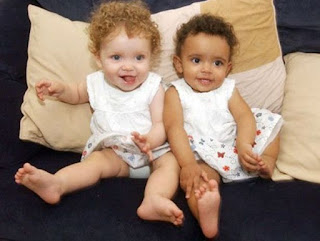 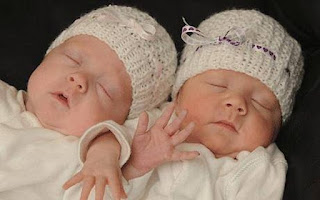 Identical twins also known as monozygotic occur when one fertilized zygote (egg) splits into two separate embryos. They have almost perfectly match DNA and look very alike, though they can also look quite different especially if TTTS was a factor during pregnancy. Different birth weights can result in being mistaken for fraternal Multiples. A DNA test can be done to confirm whether or not your little ones are identical or fraternal.

Fraternal twins also known as dizygotic happens when two eggs have been realised by the mother and then fertilized by two sperm. They can be two boys, two girls or one of each a boy and a girl.
Fraternal twining is are hereditary and have their very own placenta, though sometimes they can fuse together. Dizygotic multiples are the most common of all twining.


Other Types of Twins

Mirror image twins form the same way as monozygotic, splitting more than 7 days after conception. About 25% of all identical twins are mirror image. This means one may be right handed while the other is left handed, their hair may have swirls growing in the opposite directions, identical birthmarks on opposite sides or the body and even suck on different thumbs. You could say it’s like looking in a mirror.

Conjoined Twins are also monozygotic (identical) and are also known as Siamese Twins. This occurs whilst in the womb and they do not completely separate, they can share organs, tissue or even limbs. Surgery to separate the conjoined multiples has been successful but brings many risks.

Here is some information about conjoined twins, which has always been a medical wonder and curiosity by all.
From how often this phenomenon occurs, statistics and history. What would you like to know?

Though there is no real test to confirm polar body twinning this refers to an egg splitting before fertilization then each half will be connected with two different sperm. Half multiples look very alike but their DNA is not matching.

Very rarely multiples can be conceived at different times. During early pregnancy, an egg can be released which could be fertilized resulting in fraternal twins, this process is called superfecundation.

This occurs when two sperm fertilize one egg which then later splits. These types of twins were acknowledged in 2007 in a pair of 3 year old multiples.


Twins who have Different Fathers

When a woman releases more than one egg and has different sexual partners who both fertilize an egg each. This is extremely rare some say only occurring as little as one in a million. The term used is heteropaternal superfecundation.

These types of twins are dizygotic of different racial characteristics, known by the term heteropaternal superfecundation. In the UK two bi-racial parents conceived fraternal twin girls, one having fair hair, skin and blue eyes (like their mother) while the other has dark hair, eyes and skin (like their father). The one in a million family seven years later fell pregnant again, having twins once again and the one in a million occurrence was repeated with lovely girls also having different skin tones. In another case this was due to a lab mix up during IVF.

Though identical's are thought to be always the same gender, in extremely rare cases boy/girl monozygotic twins is a possibility. This happens when there is a genetic mutation in male babies, one baby loses a Y chromosome which then develops as female. A chromosome disorder known as Turner’s Syndrome would affect the female, symptoms can include extremely short stature, puberty issues, hearing problems among others.

This is when conjoined twins develop disproportionately with the stronger baby supporting the fetus fetu. A parasitic twin can consist of extra limbs or abnormal cell growth that grows inside the other stronger twin.


Multiples can Have Different Birthdays

Let’s say baby number one is born at 11:55pm and the second twin is born at 12:01am the next day, this is the most common explanation for different birthdays.
They could even be born in different years, if you had twin A on December 31st the other could be born on the 1st of January the next year.

Support : Copyright © 2015 | About us | Contact us | Privacy Indian Hindu Baby Names
Indianbabynameslist of New Baby Born Child/Kids names with their sanskrit meanings. Search and download Hindu, Muslim, Sikh, Christian, and Jain baby names. Hindu names based on mythology and sorted by rashi for your convinence."> You can find Indian baby names or Hindu baby names by gender, by alphabet, by names of hindu gods and goddess, sanskrit baby names and in many other ways like birth month-rashi, birth star-nakshatra etc. No other Indian baby names and parenting site offers this many choice for selecting a suitable baby name. All this information is provided for free. You will also find articles related to baby naming, hindu traditions, numerology, astrology and zodiac for your baby.